And We Had Pets
Click on any Image to Enlarge it. 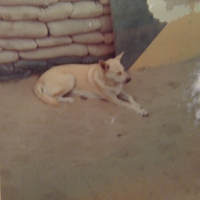 Great, great story; soldiers and their pets; in every war there always were pets adopted. There were three, or more, in my time in D16 (There were none in C1-1CAV as they were strictly verboten.) it seems there was always a platoon dog. Snoopy was in the second platoon and was wounded on 4 March. Some one made a Purple Heart for him and he was promoted to Corporal.

One time later, when the CO and I split the company, my half was ambushed just before we linked up in a pass in the Highlands. Snoopy got off the track to bark and assault the enemy, and when the firefight ended, we moved out without him till someone noticed he wasn’t on board. I had to stop the column and there he was about a mile back running for all he was worth to catch up. Went into a herringbone and dropped the ramp for him. Tactically, pretty stupid !, but there was no way I could leave him; I would’ve been shot.

Cool was DOC 13’s dog. When DOC  went on R&R just before DEROS, Cool was so heartbroken, the 1SG had her flown in from the field and took her to the vet at Tuy Hoa AFB to give her a shot to bring her around. When DOC came back she was fine and happy. But he soon left after for home and this time 1SG couldn’t save her; she just crawled off and died of a broken heart. 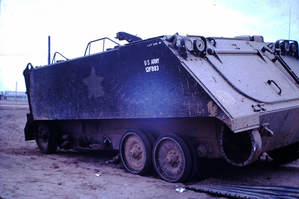 Mac Dowell was the lowest ranking man in one of the platoons and consequently was driver. The company went through a hamlet somewhere and the destruction inadvertently orphaned a baby monkey. Mac nursed it with a homemade baby bottle, and I don’t really know what he used for milk till he weaned to C-Rats. It was the damnest sight with that monkey sitting immediately behind Mac with one hand on top of his helmet. The monkey came to a sad end when she accidentally hung herself because Mac left her and his buddy didn’t watch her like he was supposed to. The CO performed full on grave site services the next day and kept Mac from shooting his buddy.

CPT Hickman, the CO, even had a dog named Sabot, after a tank main gun round. It was still a pup when the CO was hit with a command detonated mine; destroyed the track but no serious injuries. The company was coming in for a three day stand down anyway so it worked getting the old man a new track. When they pulling out that puppy did not want any part of that track, and the Batt 1SG had to throw him into the back hatch.

Technically, C Troop did not have have any pets, but there was a mutt that hung out at our forward base in the Pineapple Forest. On this occasion, Miss Alabama Ist Runnerup Miss America 1968, was on a goodwill tour visiting dirty, smelly, horny  GI’s far forward. This dog didn’t know what a sweet smelling round eye woman was, and the last thing I saw of Miss Alabama 1st Runnerup 1968 was her trying to scramble back on the chopper with this mongrel chasing close behind her. I laughed my ass off. My men were mad at me for not shooting the dog. I told them I wish it was me chasing Miss 1st Runnerup.

I do really love dogs.
Un-named 1st Lieutenant
Although the Troopers thought they were being listening post quiet, someone must have laughed out loud or offered Boom Boom some encouragement.  Just as Boom Boom was putting the finishing touch on his task, the First Sergeant came around the corner.  His eyes become as big as any I have ever seen. I'm sure the first thing on his mind was that his dog was being raped.  He yelled...no, he screamed at us but we were already running into the night.  We never let Boom Boom go back to the area again.  We didn't go back to base camp often then, but when we did Boom Boom had to stay with the tracks so the 1st Sergeant would not see him.

Charlie and Josephine were lovers, even though she was was much larger than he. Many claimed to own Charlie or Josephine, but they only belonged to each other. They spent their days climbing on any trooper that would give them food or allow them to groom their hair. They loved to hang around the entrance to a tent so they could pounce on anyone entering or leaving. We are sure that when we left garrison, they took care of each other, and waited patiently for the Sky Soldiers to return.  They were D/16th through and through and we are certain that generations of the Josephine and Charlie relationship have survived to produce many Airborne simian troopers.